U.S. Catholic Sisters Against Human Trafficking (USCSAHT) is a collaborative, faith-based national network that offers education, supports access to survivor services, and engages in advocacy to eradicate modern-day slavery. We work to inform the public, prevent this assault on human dignity, and assist survivors to live fulfilling lives.

Our members include 100+ congregations of Catholic Sisters, coalitions working against human trafficking and individuals who share our mission. Ending slavery is everyone’s work!

U. S. Catholic Sisters Against Human Trafficking envision a world without slavery with a network of services and resources to inform the public, prevent the crime and assist survivors to achieve a fulfilling life.

Our anti-trafficking efforts reflect the core values of our faith:

• Belief in the inherent dignity of every human person;
• Commitment to those who are poor and vulnerable;
• Establishment of right relationships to promote the common good;
• Defense of the basic rights of workers;
• Solidarity with one another and the willingness to enter into another’s joys and sorrows.

We challenge our Church, government officials and ourselves to consider these values in all that we do and we invite all people who share these values to join us in our work.

In April 2013, 15 sisters who were engaged in anti-trafficking work throughout the U.S. were invited to gather in Washington D.C. Sister Margaret Nacke, CSJ, from Concordia, KS, and Sister Ann Scholz, SSND, Associate Director for Social Mission, LCWR, were instrumental in convening this group. Alexia Kelley, President, and CEO of FADICA (Foundations and Donors Interested in Catholic Activities), provided financial support for this gathering and graciously hosted this initial three-day meeting.

While in Washington, these sisters met with representatives from the Polaris Project and several government officials who were engaged in anti-trafficking work. They also spent time sharing and reflecting with one another about their own work in the anti-trafficking arena. They realized the benefits of joining their efforts together and becoming a national network and the public, corporate voice for U.S. sisters on the issue of human trafficking.

In 2016, U.S. Catholic Sisters Against Human Trafficking became a not-for-profit 501(c)3 organization governed by a Board of Directors. Our membership has grown to include 100+ congregations of women religious, Catholic coalitions working to end human trafficking and several individual partners.

In 2018, USCSAHT hosted “Borders Are Not Barriers,” a gathering of all Talitha Kum networks in the Western Hemisphere.

The staff of USCSAHT has grown to include Rebecca Guzman (Development Director) and Theresa Flores (Program Director). USCSAHT hosts “Borders Are Not Barriers” 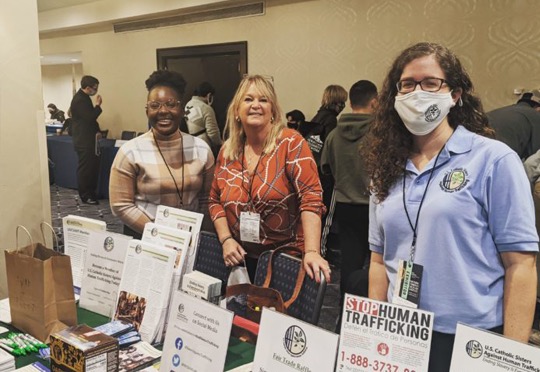 Sign up to Receive the Latest News and Action Alerts From U.S. Catholic Sisters Against Human Trafficking!